1) A Reading from the Holy Gospel according to Matthew (11: 25-30)
Jesus exclaimed, “I bless you, Father, Lord of heaven and earth, for hiding these things from the learned and the clever and revealing them to mere children. Yes, Father, for that is what it pleased you to do. Everything has been entrusted to me by my Father; and no one knows the Son except the Father, just as no one knows the Father except the Son and those to whom the Son chooses to reveal Him. Come to me all you who labour and are overburdened and I will give you rest. Shoulder my yoke and learn from me, for I am gentle and humble in heart and you will find rest for your souls. Yes, my yoke is easy and my burden light.”

2) A Reading from the Holy Gospel according to Matthew (27: 45-54)
When the sixth hour came there was darkness over the whole land until the ninth hour. And at the ninth hour Jesus cried out in a loud voice, “Eloi, Eloi, Lama Sabachthani?” which means, “My God, My God, why have you deserted me?” When some of those who stood by heard this, they said, “Listen, he is calling on Elijah.” Someone ran and soaked a sponge in vinegar and putting it on a reed, gave it to him to drink saying, “Wait and see if Elijah will come to take him down.” But Jesus gave a loud cry and breathed his last. And the veil of the Temple was torn in two from top to bottom. The centurion, who was standing in front of him, had seen how he had died and said, “In truth this man was the Son of God.”

3) A Reading from the Holy Gospel according to John (11: 17-27)
On arriving at Bethany, Jesus found that Lazarus had been in the tomb for four days already. Bethany is only about two miles from Jerusalem, and many Jews had come to Martha and Mary to sympathise with them over their brother. When Martha heard that Jesus had come she went to meet him. Mary remained sitting in the house. Martha said to Jesus, “If you had been here, my brother would not have died, but I know that, even now, whatever you ask of God, he will grant you.” “Your brother,” said Jesus to her, “will rise again.” Martha said, “I know he will rise again at the resurrection on the last day.” “I am the resurrection and the life. If anyone believes in me, even though they die, they shall live, and whoever lives and believes in me will never die. Do you believe this?” “Yes Lord,” she said, “I believe that you are the Christ, the Son of God, the one who was to come into this world.”

5) A Reading from the Holy Gospel according to John (14: 1-6)
Jesus said to his disciples: “Do not let your hearts be troubled. Trust in God still, and trust in me. There are many rooms in my Father’s house; if there were not, I should have told you. I am going now to prepare a place for you, and after I have gone and prepared you a place, I shall return to take you with me; so that where I am you may be too. You know the way to the place I am going.” Thomas said, “Lord, we do not know where you are going, so how can we know the way?” Jesus said, “I am the Way, the Truth and the Life. No one can come to the Father except through me.”

6) A Reading from the Holy Gospel according to John (3: 37-40)
Jesus said to the crowd: “All that the Father gives me will come to me and whoever comes to me I shall not turn away; because I have come from heaven, not to do my own will, but to do the will of him who sent me. Now the will of him who sent me is that I shall lose nothing of all that he has given to me, and that I should raise it up on the last day. Yes, it is my Father’s will that whoever sees the Son and believes in him shall have eternal life, and that I shall raise them up on the last day.”

7) A Reading from the Holy Gospel according to Matthew (25: 31-36)
Jesus said to his disciples: “When the Son of Man comes in his glory, escorted by all the angels, then he will take his seat on his throne of glory. All the nations will be assembled before him and he will separate one from another as the shepherd separates sheep from goats. He will place the sheep on his right hand and the goats on his left. Then the King will say to those on his right hand, “Come, you whom my Father has blessed, take for your heritage the kingdom prepared for you since the foundation of the world. For I was hungry and you gave me food; I was thirsty and you gave me drink; I was a stranger and you made me welcome; naked and you clothed me, sick and you visited me, in prison and you came to see me.” Then the virtuous will say to him in reply, “Lord, when did we see you hungry and feed you; or thirsty and give you drink? When did we see you a stranger and make you welcome, naked and clothe you; sick or in prison and go to see you?” And the king will answer, “I tell you solemnly, in so far as you did this to one of the least of these brothers and sisters, you did it to me.”

8 ) A Reading from the Holy Gospel according to Luke (24: 13-16, 28-35)
On the first day of the week, two of the disciples were on their way to a village called Emmaus, seven miles from Jerusalem, and they were talking together about all that had happened. Now as they talked this over, Jesus himself came up and walked by their side; but something prevented them from recognising him. When they drew near the village to which they were going, he made as if to go on; but they pressed him to stay with them. “It is nearly evening,” they said, “and the day is nearly over.” So he went in to stay with them. Now, while he was with them at table, he took the bread and said the blessing; then he broke it and handed it to them. And their eyes were opened and they recognised him; but he had vanished from their sight. Then they said to each other, “Did not our hearts burn within us as he talked to us on the road and explained the scriptures to us?” They set out at that instant and returned to Jerusalem. There they found the eleven assembled together with their companions, who said to them: “Yes it is true. The Lord has risen and had appeared to Simon.” Then they told their story of what had happened on the road and how they had recognised him at the breaking of the bread. 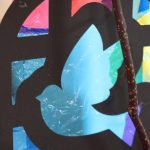 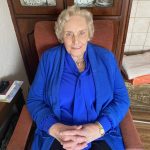 A very Happy 90th birthday to the ever young Kathleen McGlynn. Wishing her continued good health and … END_OF_DOCUMENT_TOKEN_TO_BE_REPLACED 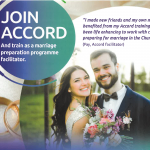