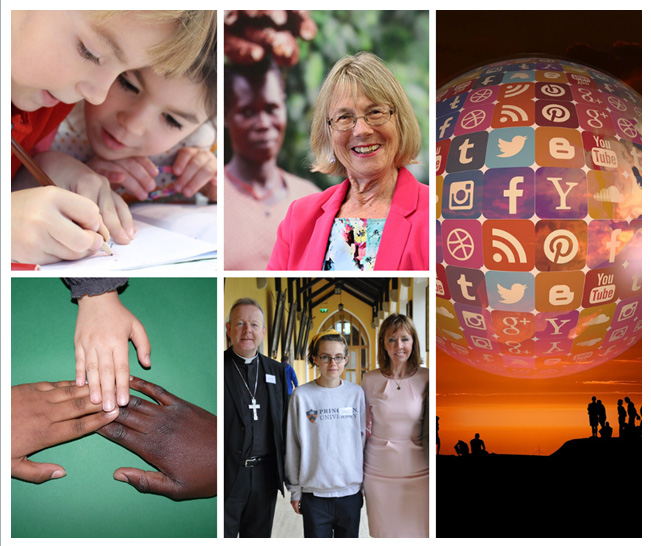 The Summer 2019 General Meeting of the Irish Catholic Bishops’ Conference concluded this evening in the Columba Centre, Saint Patrick’s College, Maynooth.  Please see below issues discussed by the bishops during their meeting:

Ireland has a long tradition of emigration.  For generations, women and men have left our shores in search of work and better living conditions with many making an enormous contribution to their host countries while others returned home to enrich our society and economy with their experience.

Today, unlike the past, migrants from other countries live and work side-by-side with Irish people.  These are our neighbours and part of our community, whose children go to the local school and develop friendships and play together.  Migrants have their own culture, language and religious affiliation while bringing many gifts which are, as Pope John Paul II said, offered to a society which in a sense has less right to them than their own country of origin (cf. Laborem Exercens, 23).

Some of those who come to Ireland have escaped from very dangerous situations, including religious persecution.  On top of the trauma of losing their homes, their jobs and often their families, they now face the challenge of being strangers here, of starting again without a network, where language, the education system, customs and culture are quite different.

Bishops said, “We wish to express our concern about the rising number of incidents of racism, xenophobia, and religious intolerance in Ireland – carried out sometimes by those who consider themselves faithful Christians – and which can occur anonymously or otherwise on social media, in quiet conversations, by open verbal onslaughts or through physical violence.

“We have noted the recent reports of both the European Commission against Racism and Intolerance as it applies to Ireland, and the Good Relations Indicators annual update in Northern Ireland which, along with feedback from people in our own parishes and dioceses, give us cause for pastoral concern in this regard.

“Human dignity does not, however, depend on the colour of a person’s skin, their nationality, accent, or their religious affiliation.  Every person is created in the image of God and called into a relationship with Him.

“In our rapidly changing Ireland, we appeal for a new-found respect for every human person, without exception, and a complete avoidance of the use of offence language.  To prevent bigotry, religious intolerance and racism, we encourage the building of relationships at local level so that everyone can feel welcome wherever we gather.  We especially ask parents, teachers, young people, youth leaders, priests and religious, journalists, politicians, employers and sports coaches to actively reject racism, intolerance and sectarianism.”

“We join in the widespread criticism of others of the undignified living conditions and treatment of those living in direct provision centres.  As Christians, we are called to follow the example of Jesus as set out in His parable of The Good Samaritan.”

Bishops noted that the Minister for Education and Skills, Mr Joe McHugh TD, intends to publish in the near future a review of relationships and sexuality education (RSE) by the National Council for Curriculum and Assessment (NCCA).

Catholic schools encourage excellence in relationship and sexuality education, and in all learning, while promoting human flourishing in line with authentic Gospel values.  At the heart of Gospel values are understanding, care and respect for the dignity of the human person.  In the bishops’ submission to the NCCA, they emphasised the importance of developing resources for relationships and sexuality education which respond to our changing cultural and social reality.  The publication of the forthcoming NCCA review is therefore timely in this regard.

Bishops strongly support parents as the primary educators of their children, particularly in the area of relationships and sexuality education.  The bishops stressed the central role of parents as they nurture their children to grow in these challenging times.  Parents must therefore be consulted in the development of RSE programmes.  Teachers also face challenges in RSE, and they need support.  Appropriate resources including the provision of in-service training and continuing professional development are required to address current deficits.

In Catholic schools young people learn about values, about respect, about consent, about self-esteem, and about a whole range of other important issues in relation to relationships and sexual health in age appropriate ways, and in cooperation with parents.  Contrary to some recent negative commentary, in Catholic schools young people do learn facts as part of their relationships and sexuality education.

RSE in Catholic schools seeks to build high self-esteem and resilience in young people and this approach permeates the entire life of the school.  Developing in young people a sound moral compass is the task of parents/guardians and the entire school community.

In this context the Bishops’ Conference welcomed publication on 10 June by the Congregation for Catholic Education of Male and Female He created them.  This discussion document makes an important contribution to Catholic thought on gender, and offers guidance to “those who work in the education of young people to help them address … the most debated questions around human sexuality”.  The methodology of the document is based on three principles “seen as best-suited to meet the needs of individuals and communities: to listen, to reason and propose” [para 4].

In particular bishops underscored the document’s proposition on “the need to educate children and young people to respect every person in their particularity and difference so that no one should suffer bullying, violence, insults or unjust discrimination based on their specific characteristics (such as special needs, race, religion, sexual tendencies).  Essentially, this involves educating for active and responsible citizenship, which is marked by the ability to welcome all legitimate expressions of human personhood with respect” [para 16].

Mr John Morgan, chairperson, and Ms Teresa Devlin, chief executive of the National Board for Safeguarding Children in the Catholic Church in Ireland, advised the Bishops’ Conference on activities engaging the current work of the Board.   Bishops discussed, with the National Board representatives, Pope Francis’ Moto Proprio letter Vox Estis Lux Mundi (You are the Light of the World), which was published on 9 May, regarding the Church’s handling of safeguarding children and vulnerable adults.

Bishops discussed the invitation from the Government to a plenary meeting of representatives of Churches, faith communities and non-confessional organisations in Dublin Castle on 4 July, to be chaired by the Taoiseach, Mr Leo Varadkar TD.

Bishops nominated Archbishop Diarmuid Martin of Dublin, vice-president of the Bishops’ Conference, and Dr Emer Crooke, research coordinator with the Council for Justice & Peace, to attend this plenary meeting.  The following topics were submitted in advance by the bishops’ delegation: conscience, care of the marginalised, and support for parents who wish for a faith based education for their children.

Bishops commended the seminar organised by the Council for Communications on 29 May to mark Pope Francis’ message for World Communications Day 2019 We are members one of another (Eph 4,25).  From network community to human communities.  The seminar was also informed by the Pope’s final address, in February, at the Vatican meeting on ‘The Protection of Minors in the Church’ and by his post-synodal Apostolic Exhortation Christus Vivit To Young People and to the Entire People of God, which was published in March.

Entitled ‘Believers in the Digital World: Opportunities for Mission’ the seminar was chaired by Senator Joan Freeman and heard contributions from faith representatives and digital experts.  In his opening address, Archbishop Eamon Martin encouraged the faithful to be a force for good by responsibly contributing to the digital world and offered ten principles to guide our presence in this context https://www.catholicbishops.ie/2019/06/12/10-principles-to-guide-our-presence-on-the-digital-highways/; Brenda Drumm of the Catholic Communications Office focused on faith and evangelisation in the digital space; Detective Sergeant Mary McCormack presented on the extent of the challenge to society of online abuse and how to respond; Darren Butler of the Bishops’ Pastoral Response to Substance Misuse spoke on the role of parishes in addressing internet addiction; while Emma Tobin and Oisín Walsh reflected on the social media environment for young people.  Video input on the influence of digital technology in their lives was provided by students of Saint Peter’s College, Dunboyne.  Outcomes from the seminar included the reinforcing of the centrality of digital media in many of the aspects of our lives as well as the desire of young people to have the Church accompany them as believers in the digital world.

Thanking parishioners for support during Lent and cyclone in southern Africa

Bishops expressed their deep gratitude to parishioners, priests and religious across the country for their generosity to Trócaire’s 2019 Lenten campaign which highlighted people’s right to land.  Bishops also gratefully acknowledged the public’s support for Trócaire’s Emergency Appeal in response to the devastating impact, during March, of Cyclone Idai in southern Africa which raised €413,000.

The cyclone once again showed how vulnerable people in the poorest parts of the world are to extreme weather conditions.  With the support of parishes across Ireland, Trócaire has been able to deliver vital humanitarian aid to over 135,000 people across Mozambique, Zimbabwe and Malawi.  As well as the initial devastating loss of life, the cyclone destroyed crops and food stocks across the region.  Bishops were advised that there is a real danger of food shortages over the coming months as people rebuild from the disaster.  Trócaire’s long-term approach should make a real difference to the lives of people affected by the crisis.  Trócaire will continue to work to support the people of southern Africa but would be unable to do so without the ongoing and very generous support of the Irish public.

Bishops welcomed the theme for Catholic Schools Week (CSW) 2020 ‘Catholic Schools: Living in Harmony with God’s Creation’ which will take place across Ireland, north and south, from 26 January to 2 February next year.  Resources are currently being prepared for use by schools