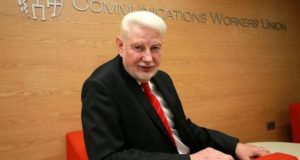 One of Ireland’s best-known trade unionists has come out for a ‘no’ vote in the forthcoming referendum on abortion.

David Begg – who served as secretary general of the Irish Congress of Trade Unions from 2001 to 2015 – described the defence of the unborn as “the most crucial justice question of our time”.

Writing in the current issue of Doctrine and Life magazine, Mr Begg insists that “the pro-choice side tends to use language which is clinical in order to mask the enormity of what is involved.

“While acknowledging that the development of a baby in the womb is a gradual process, the complex physiology involved means that we are not dealing with an inanimate thing. The Irish Times columnist, Breda O’Brien, put it succinctly recently when she wrote, ‘Nobody asks you when your foetus is due’,” he writes.

On the question of when human life begins, Mr Begg says “we simply do not know for certain.

“Nevertheless, as a grandparent who has seen the seven-week scans for eight grandchildren, I know intuitively that life begins much earlier than the end of the first trimester. A heartbeat can be detected after eight or nine weeks gestation,” he writes.

On the issue of when the mother has been raped, Mr Begg writes “I don’t see how the Eight Amendment question can be debated satisfactorily unless the plight of rape victims is considered.

“However, whether a twelve-week window is required for intervention is open to question. Surely a woman who has been raped does not need to wait until it is certain that pregnancy has been established? Would it not be effective to have recourse, immediately after the rape, to the ‘Morning After’ pill or to other procedures that ensure pregnancy will not occur?” he asks.

On the issue of when the child in the womb is diagnosed with a life-limiting condition that means he or she may not live for very long after birth, Mr Begg says he believes that “in circumstances where fatal foetal abnormality is diagnosed, it is not reasonable to expect a mother to carry a baby to term.

“There have been cases where a baby survived despite a diagnosis of fatal foetal abnormality. But this is something the parents can only decide on in consultation with their obstetrician. It is not clear to me why the text of Article 40.3.3. could not be amended to cater for such situations,” he writes.

He also warns the Government against unintended consequences if voters opt to remove the right to life of the unborn from the Constitution.

“The Government has said that their intention is to make abortion safe, legal and rare. I do not doubt their sincerity. Nevertheless, the decision of the Supreme Court early in March makes it clear that, outside Article 40.3.3. of the Constitution, there will no longer be any constitutional protection for babies before birth.

“What happens in the future will be a matter solely for the Oireachtas, and the parliamentary arithmetic, in circumstances where some members are strongly pro-choice, may bring about further liberalisation of abortion,” according to Mr Begg.

He concludes that “absent the option of a constitutional alternative to Article 40.3.3, and knowing what the inevitable consequences will be, I cannot in conscience vote to repeal the Eight Amendment”.

To mark the recent feast day of Saint Oliver Plunkett, a native of our diocese, we are delighted to … END_OF_DOCUMENT_TOKEN_TO_BE_REPLACED