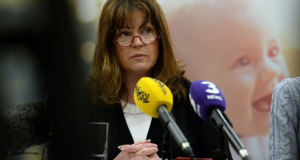 A leading pro-life group has condemned the actions of Minister of Health Simon Harris for “cynically” using the issue of abortion pills to argue for the repeal of the Eighth Amendment and has suggested that better solutions to this issue are needed.

Speaking at a press conference in Dublin today, LoveBoth spokesperson Caroline Simons said that Simon Harris, alongside Dr Rhona Mahony and Dr Fergal Malone are using the problem of the importation of abortion pills to win votes in the Minster’s effort to remove the constitutional provision.

“Today we were told by two obstetricians that women who have taken abortion pills are afraid to present themselves to maternity hospitals. Instead of acting to address this problem, Minister Simon Harris has used these doctors and the issue of abortion pills generally to express a new-found concern about the health risks associated with them,” she said.

“However,” she continued, “if one looks at the website funded by the Department of Health to tackle public health problems, ‘healthpromotion.ie’ you will find every topic from obesity to smoking but no mention of abortion pills.”

She added that if the Minister was really concerned about abortion pills and the problem they represent he would have done something practical about it such as promoting information about the dangers of abortion pills and resourcing the customs authorities to intercept them.

“It’s quite clear that repealing the Eighth Amendment and introducing abortion on demand will not mean that problem of importation and the use of abortion pills will suddenly disappear. People deserve actual solutions to the problem of abortion pills, not the removal of all rights from the unborn child which will not solve the problem,”  she said

To mark the recent feast day of Saint Oliver Plunkett, a native of our diocese, we are delighted to … END_OF_DOCUMENT_TOKEN_TO_BE_REPLACED