Please see below issues that were discussed during the Autumn 2016 General Meeting of the Irish Catholic Bishops’ Conference which concluded today in Saint Patrick’s College, Maynooth:

On 22 October, formal preparations began for the 9th World Meeting of Families 2018 and these are being led by Archbishop Diarmuid Martin of Dublin as President and host, and by Father Timothy Bartlett in his role as Secretary General.  Last May, Pope Francis chose “The Gospel of the Family: Joy for the World” as the theme for this major pastoral celebration which will take place in Dublin from 22 to 26 August 2018.  At their meeting, bishops encouraged the faithful to pray the Prayer to the Holy Family which has been written by Pope Francis and which he published in this year’s apostolic exhortation Amoris Laetitia (The Joy of Love):

Jesus, Mary and Joseph,
in you we contemplate
the splendor of true love;
to you we turn with trust.

Holy Family of Nazareth,
grant that our families too
may be places of communion and prayer,
authentic schools of the Gospel
and small domestic churches.

Holy Family of Nazareth,
may families never again experience
violence, rejection and division;
may all who have been hurt or scandalized
find ready comfort and healing.

Holy Family of Nazareth,
make us once more mindful
of the sacredness and inviolability of the family,
and its beauty in God’s plan.

600,000 copies of Pope Francis’ Prayer to the Holy Family are being made available to parishes across Ireland so that families can take a copy home after Christmas Mass from their church’s crib.  The prayer is available in eleven languages: English, Irish, Polish, French, German, Italian, Russian, Chinese, Spanish, Portuguese and in Arabic and the Catholic Church across the world is being asked to place the Prayer to the Holy Family near parish cribs at the Christmas Vigil Mass on Christmas Eve, and also throughout the Christmas season.

Bishops also launched the official logo for the World Meeting of Families 2018: 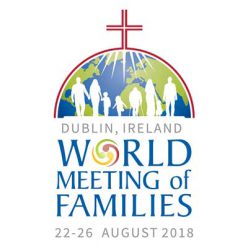 In the context of the invitation for submissions by the Citizens’ Assembly regarding Article 40.3.3 of the Constitution of Ireland, bishops have consulted carefully with members of the lay faithful, both women and men.  The Irish Catholic Bishops’ Conference is currently finalising the text of its submission which will be published over the coming days.

Bishops expressed their concern at the rise in homelessness across our country.  According to the Society of Saint Vincent de Paul, there are almost 90,000 households waiting for social housing in the Republic of Ireland – and over 2,000 children living in homeless accommodation in Dublin.  The latest official count by the Dublin Regional Homeless Executive has found 142 rough sleepers on the streets of the capital, an increase of 56% over the past year.

Many dioceses have undertaken special initiatives for the homeless and people in need this Christmas.  Since December 2014, the Archdiocese of Dublin has provided accommodation for 30 homeless people, operated by Crosscare.  The Archdiocese is currently in negotiations with Dublin City Council and the Dublin Regional Homeless Executive with a view to providing two other premises for emergency accommodation.

The social teaching of the Catholic Church informs us that each person, regardless of his or her economic or social position, racial or faith background, must be treated with full dignity.  Sadly this Christmas there are tens of thousands of people living in our parishes who are in crisis, struggling with rents; with no food in the cupboard; no heating in their home and in need of fuel and basic clothing.  Such families are living in cramped conditions in hotels and bed-and-breakfasts, or desperately trying to hold onto their tenancies in the private rented sector.  Bishops strongly commended the work and generosity offered by the thousands of volunteers who are working to alleviate the suffering and indignity faced by these families.

Especially in this season of Advent as we prepare for Christmas, bishops ask the faithful to pray to the Holy Family – who were themselves homeless – for the intentions of those are homeless.  Bishops ask all people of goodwill to support, in every that they can, homeless agencies in their work towards building a society where homelessness, and poor housing, which are an affront to human dignity, are eradicated forever.

The 27th Irish Inter–Church Meeting (IICM) took place over the 24 and 25 November at Mount Saint Anne’s Retreat Centre, Portarlington Co Laois.  The IICM is the formal meeting between the Irish Catholic Bishops’ Conference and the Irish Council of Churches and the meeting provides a space for Christian churches in Ireland to come together in prayer and to reflect on issues of shared concern and to strengthen relationships.  Foremost in the discussions at the meeting was the plight of the ongoing persecution of Christians in the Middle East, whose very existence is under threat.  Delegates heard reports and experiences which demonstrated the sheer scale of the suffering and the urgent need for a response from the international community, while recognising that the complexity of the problems do not lend themselves to obvious, externally-imposed solutions.

Bishops expressed their solidarity and support for Christians, and to all who suffer and have been displaced due to violence in the region.  Bishops said that to respect the dignity of the human person, all people of faith and goodwill need to be strong advocates for the protection of vulnerable minorities.  Bishops endorsed the final communiqué of the IICM which stated,

“Lasting peace and security for the region can only be achieved in the context of a renewed international commitment to solidarity, human rights and respect for diversity.  As churches, we can play our part by keeping this issue on the agenda of our political leaders and ensuring that the victims of persecution are not forgotten, by making donations in support of the urgent humanitarian needs and by working to ensure that our society models the inclusive approach to minorities we would wish to see in the Middle East and throughout the world.”

Trócaire’s Christmas Appeal this year highlights the plight of refugees and those displaced by conflict.  Over 60 million people around the world have had to flee their homes due to fears for their safety.  Bishops continue to be deeply concerned for the well-being of Syrian people who have suffered almost six years of brutal war.  Many other countries – from South Sudan to Myanmar – continue to be blighted by displacement as innocent families are caught in the crossfire of conflict.  Bishops urge support for Trócaire’s Christmas Appeal to help the organisation’s life-saving work around the world.  See trocaire.org.

To mark the recent feast day of Saint Oliver Plunkett, a native of our diocese, we are delighted to … END_OF_DOCUMENT_TOKEN_TO_BE_REPLACED