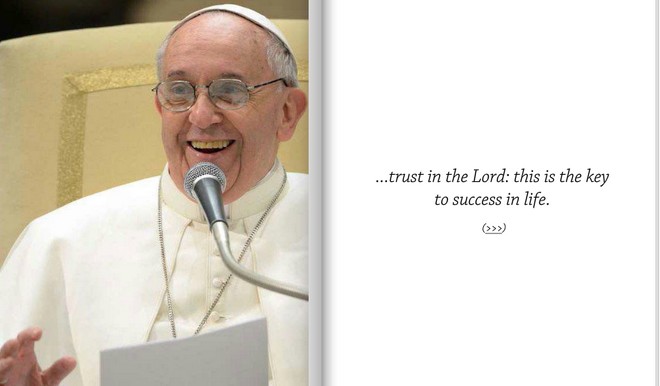 To celebrate the first anniversary of the election of Pope Francis to the chair of Peter, the Vatican have created an archive including highlights from Pope Francis’ first year of ministry, which you can access here.

Vatican City, 12 March 2014 (VIS) – Tomorrow, 13 March, will be the first anniversary of the election of Pope Francis to the See of St. Peter. These 365 days of his papacy have been characterised as a “time of mercy”, as described by the Pope himself. During these twelve months of intense activity, the Pope “from the end of the earth” who asks us to pray for him, has started out on a new way of working that, with a slow but sure pace, has drawn renewed attention to issues not only of an ecclesiastical nature. The “priest of the world”, as his special secretary Msgr. Alfred Xuereb calls him, “has not wasted a minute! He works tirelessly and, when he feels the need to take a moment’s pause, he closes his eyes and does nothing: he simply sits and prays the Rosary”.

To commemorate this first anniversary, the director of the Holy See Press Office, Fr. Federico Lombardi, S.J., gave an interview with Vatican Radio in which he reflects on this year and its “great impulse to a journeying Church”.

“The most important aspect of this first year is without doubt the great attention, the great attraction of the people – I say the people, meaning not only practising Catholics, but everyone in this world – the great attention for this Pope, for his message. It is something that I think and hope is very deeply rooted in the heart of the people, who have felt touched by a word of love, attention, mercy, closeness, proximity, in which through the man, the Pope, the love of God arrives”.

“The Church truly seems to be a journeying people. This is her most characteristic aspect: a sense of great dynamism. The Pope has given a great impulse and journeys with a Church that seeks God’s will, that seeks her mission in today’s world for the good of all, truly going out to the peripheries, to the ends of the world”, he continues, adding that there are “manifestations of attention, therefore, that come from places, from atypical organs of the press”, that “mean that his message reaches its target”.